Chris Graham meets Richard and Karen Haste; a couple who’ve embraced the pig-keeping hobby and are now revelling in the many pleasures it can bring. 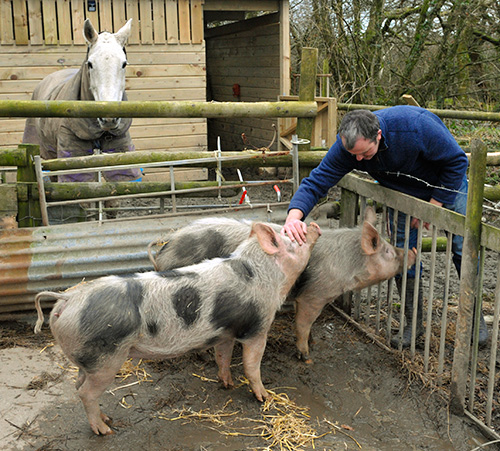 There are lots of reasons why people get involved with pigs. Some have a family connection and strong, childhood memories that they want to rekindle. Others, inspired by magazines like this one, or one of the many self-sufficiency-type programmes on television, simply fancy having a go with some of their own livestock at home. For Richard and Karen Haste, though, things were rather different.

Although Richard’s parents are farmers, he was actively discouraged from following them into agriculture so, after an unappealing apprenticeship in vehicle engineering, he took a job with the local council. Karen, on the other hand, is a self-confessed townie, and doesn’t have even the remotest connection with life in the farm.

Nevertheless, the couple worked their way progressively up the property ladder until, in 2009, they were in a position to take the plunge and buy a house in the country, with some land.

The property in question was an aged and decidedly down-at-heal Devon longhouse, boasting wonderful potential, five acres and an assortment of outbuildings. The couple and their three, young children moved straight in and, from the way they describe it, it was like taking a step back in time.

As luck would have it, the winter that year was one of the coldest on record and this, combined with no central heating and a damp, dilapidated building, provided a stark contrast to the comfortably warm and cosy town house they’d just left!

But, with resilient determination, the family gritted its teeth and got on with what had to be done, and progress with the essential improvements and modernisations required was steady.

Then, regrettably, a close family friend died, which left Richard feeling decidedly upset and depressed, as he recalls. “It was a difficult time for us all, and one way that I felt would help cheer me up would be to buy some livestock. So I went to a local market where, lo and behold, I found some pigs!

“The lot I settled on was a Gloucestershire Old Spots sow cross, that was being sold with three weaners. Something about it just seemed right and, although I didn’t have any pig-related experience at all, I put in my bid and bought them. Karen was quite surprised as it was completely ‘out of the blue’, but I just knew it was going to prove the right thing to have done.”

The new arrival – christened Rosie – and her three youngsters proved to be an instant success with the whole family but, as Richard explained, there wasn’t really much of a plan at that stage. “I certainly hadn’t gone into it with a masterplan in mind, or wanting to become a millionaire! I didn’t really know how things were going to develop and, looking back, certainly couldn’t have predicted that our interest and involvement with pigs would ever have grown to the extent it has. 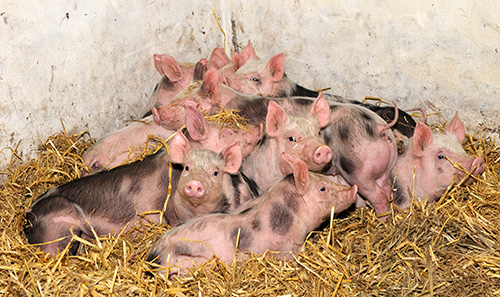 “But I very quickly came to realise that owning and caring for the pigs added a completely new dimension to our lives. I have a busy job managing the council’s waste disposal department for this area of Devon, so coming home to some livestock is a great stress-buster for me. I really look forward to it, and Karen likes to joke that the pigs now come ahead of both her and the children in my affections!”

Rosie certainly did prove to be a wise buy as, six years and 12 litters on, she’s still going strong. “She obviously can’t go on forever, though, and we keep saying that it’s time for her to go. But there’s just something about her; we’ve bonded! She’s been a brilliant, careful and attentive mother over the years, and is still doing really well considering her age; she produced 15 healthy piglets in her most recent litter.

“I think pigs are the ideal animal for me. Although we’ve got five acres, the buildings and sheds are limited, so cattle were out of the question. Also, pigs being relatively low-maintenance, have fitted in just fine with my daily, working routine.”

Rosie’s three weaners were grown to slaughter weight without drama, and were duly despatched to the abattoir. Then, having settled into the whole pig-keeping way of life so smoothly, Richard began thinking about getting more.

He started researching the pedigree breeds and, while searching on the internet, came across the Pietrain, which he was drawn to immediately. Then, when he discovered that it was the pig-equivalent of the Belgian Blue cow – a breed kept and bred for many years on the family farm – that was it; decision made!

“Further searching revealed that there was a well-known and respected Pietrain pig breeder, John Kingdon, living not too far from us, down near Newquay,” Richard explained. “So, when we were next down that way, we popped in to have a look at his stock. I got on really well with John, loved his pigs and came away full of enthusiasm and with a plan forming.

“A few weeks later I spotted an advert in the Farmers Guardian for a pedigree Pietrain sow for sale, in Scotland, which seemed too good to miss. We had her transported down (thankfully we have contacts in the haulage business), and I named the new arrival Mabel.

“In the meantime we’d got Rosie in-pig using a straw of Pietrain semen bought from an AI specialist in Somerset. We had some help from an experienced, pig-farming friend with administering this and, between us, we got the job done and it was a great success.

“I’d decided to use Pietrain with Rosie because we’d found her original weaners grew up to be a bit too fatty, and I wanted to produce a leaner carcass, and thought this would do the trick. As things have turned out, the combination has worked really well, and I’ve been using it ever since.”

It was at about this point that Richard’s pig interest split into two distinct operations. On the one hand there was the steady stream of cross-breed weaners being produced for sale and meat production and, on the other, a determined move to develop his own group of BPA-registered, pure-bred Pietrains; the Dawnmoor Herd.

Things have moved on quite quickly during the past few years, as he explained. “Currently I have seven Pietrain breeding sows, two gilts and a pedigree boar. I began developing the herd by sending Mabel – the Pietrain sow I bought from Scotland – down to John Kingdon, to run with one of his good boars.

I spotted an advert in the Farmers Guardian for a pedigree Pietrain sow for sale, in Scotland.

More recently we started getting involved in the exhibition scene; something which we all enjoy.

“As a result, she produced a decent litter of 10 piglets, although she was a little bit clumsy because she was so large. John Kingdon used to say that there was ‘an extra chop in her!’

“I built a farrowing pen and set-up a heat lamp to one side, which encouraged the piglets away from clumsy mum, and into a protection area. This certainly helped, and also allowed me to creep them that little bit earlier. In the end, we added a couple of the females from that litter to our breeding stock, and kept one of the boars – Buddy – who is still with us and working well.

“But I still needed another boar to provide fresh blood so, in 2013, we bought another eight from a another Pietrain breeder up in Scotland. I kept two out of that batch myself, and sold the other six to another breeder down here. Then I sold one of the pair I had, which left me with just one, Hamish.

“He was a beautifully muscular example of the breed but, unfortunately, turned out not to be great at his primary role in life. So, after a few faltering attempts, we decided to move him on. Since then I’ve bought four more good gilts (another different bloodline) from John Kingdon, and we’ve continued with Buddy.

“More recently we started getting involved in the exhibition scene; something which we all enjoy. We entered a sow?? at the Okehampton Show in 2014??, did reasonably well and certainly intend to do more from now on. 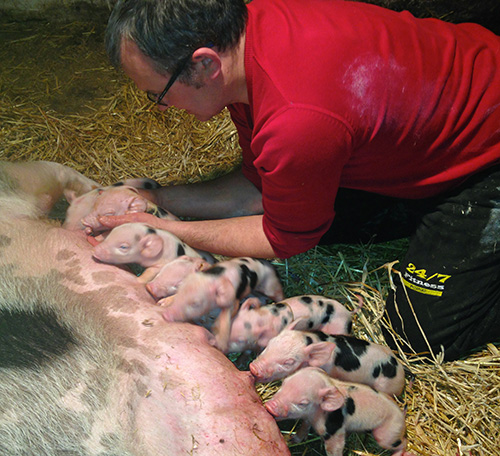 “There are no designated classes for the Pietrain, so you’re exhibiting in the ‘Any other breed’ section, which is fine, especially given that the Pietrain remains a relative rarity on the show circuit in this part of the country.

“I’ve just got back from a trip to Agribex, in Brussels, which is a fantastic event. I went with my dad and it was brilliant; lots of Pietrains and Belgian Blue cattle, and the standards were phenomenally high.

“That experience has really inspired me to start thinking about importing a boar from Belgium, but I need to find out more about what’s actually involved, and sort out some proper accommodation at this end. We may start with some semen.

“I was so impressed with the quality of the pigs out there, and fell in love with one particular boar. As luck would have it, it went on to win the show, which greatly increased its value. At the start of the event I was told it was priced at €3,000 but, once the placings had been announced, that leapt to €8,000!

“As you might imagine – based on those prices – the Pietrain remains a very important breed within the Belgian pig industry. A lot of the buyers at the sale were from AI centres, illustrating just how popular the breed currently is for crossing.”

One thing I was interested to talk about was how Richard and Karen find the Pietrain on a day-to-day basis. It’s a breed that tends to suffer a bit with a reputation for being somewhat highly-strung and, as a consequence, hard to handle.

“I’m not sure where this idea came from, to be honest,” Richard explained, “perhaps it arose from problems people had with some of the first examples that were imported into the UK back in the 1960s. Certainly, based on our experience, I can’t say that we’ve found the Pietrain anything other than a delight to keep.

“It’s like any animal, though; everything hinges on the way it’s looked after and the care and attention it’s given. Do things properly and problems will be few and far between. But fall short with your husbandry routines, and fail to interact sufficiently, and you’ll be setting yourself up for trouble.”

It was clear from chatting with Richard and Karen that both of them get immense pleasure and satisfaction from their involvement with pigs. Richard, in fact, said that he couldn’t now imagine life without them.

Finally, we touched on one other significant benefit that the family enjoys in relation to their pigs. Apart from the deliciousness of the pork they produce, there’s the confidence that the family enjoys from eating it, as Karen explained. “I love the reassurance that comes from knowing that the pork products we’re all eating, haven’t been pumped full of growth promoters, hormones and antibiotics. That’s very important as far as our young children are concerned.

“I think it’s becoming increasingly difficult to find butchers these days where you can be completely sure about the provenance of the meat you’re buying. So, producing our own gives us great peace of mind as well as immense satisfaction.”

Richard summed things up when he explained that one of the aspects he liked best about having the pigs was that “it really feels as if we’re creating something worthwhile here; something which we’ve done ourselves and which we can all be proud of.”

This article was previously published in Practical Pigs magazine. Back issues of the magazine can be purchased from https://shop.kelsey.co.uk/issue/PGG