What was supposed to be a retirement hobby for Geoff Bemand has now turned into a crusade to protect the future of his beloved Welsh pigs. Hannah Noble reports. 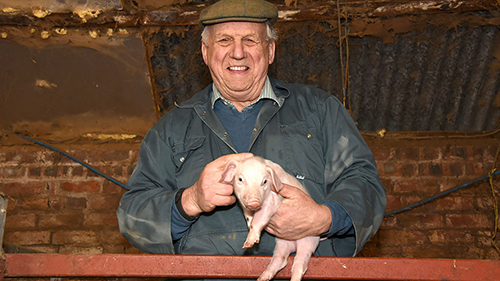 The Leysters Spring herd of pedigree Welsh pigs is the pride and joy of Geoff Bemand, Tenbury Wells, who started out with one sow back in 2013 and now has a herd of 50 plus followers. By his own admission it is a retirement hobby that ‘got out of hand’.

The main herd of pigs are kept at Holloway Common Farm where Geoff’s sons, Robert and Tom, live while the farrowing takes place at Geoff’s original holding. After first taking an interest in pigs as a young man in the 1960s when helping a breeder to show Welsh and Large Whites, Geoff found himself drawn back to the animals in his retirement and as his two favourite breeds were now gracing the rare breeds list, he thought it only right to put his efforts into their survival.

The modern Welsh pig traces back to a white lop-eared which has been kept in Wales since records began, there are now just over 500 breeding females left and the breed appears on the Rare Breeds Survival Trust’s ‘at risk’ list.

Geoff says when he first became involved with the breed there were between 1,500 and 2,000 females in the UK. He is now the Welsh breed representative for the British Pig Association (BPA) where his role is to liaise with breeders with regards to conservation of the breed, monitoring the bloodlines and trying to move them around.

He says: “Ken Austin, Swansea, has about 27 bloodlines in his Burry herd so we are trying to keep them going, but we need to spread them out. If we keep them all in one place and we have a disease problem, they are gone. They keep semen in the gene bank, but not eggs, you cannot replace the female line once it is lost.”

As well as his involvement with the BPA, Mr Geoff joined with five other breeders in 2016 and helped to form a group called UK Breeders of Welsh Pigs as a way of promoting the Welsh breed. The group organise an annual show and sale, with the hope of keeping the bloodlines alive and the next show and sale will take place at Worcester livestock market in May.

When selecting pigs to show or keep in the herd Geoff says it is important to keep a very strict standard and only register animals that are good enough. He says: “Just because you have a litter does not mean you can take every female to join the breeding herd, in some litters we do not take any. When you register an animal it should fit within the breed requirements to keep the breed standard as high as possible. If we start putting stock we are not happy with out in the market we are lowering the standard.

“What we are looking for is a pig to produce a good carcase, but the ultimate aim is find a pig which will do it many times over. We need longevity and an animal which is easy and quiet to handle.” 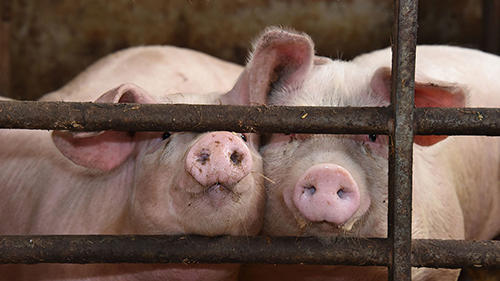 He says the Welsh pig should be a pear shape, with more volume on the back half than the front half which is where the most valuable cuts are. The shape of the ears and head are also important and there should be a triangle outline from the nose to the tips of the ears. “We want them to produce a pig with a good carcase, but they need to be able to do this many times over so longevity is important too.

“The Welsh are also good mothers, quiet and easy to handle, therefore, no stress for the animal or the owner. The Welsh pig has a covering of fat sufficient to give it that excellent taste. When you cook it is not dry and the crackling is sublime.”

The Julia family is the most prominent in the herd which was initially sourced from Mr Austin’s Burry herd, as were his two most successful male lines, Emperor and Vulcan.

Geoff got into the breed with the intention of showing them as a retirement hobby and he says preparing them for a show is a case of keeping them clean and training them to walk around a ring. His wife, Chris, and son, Robert, also help out with the management and show preparation along with two of his grandchildren, William, 20 and Anna, 17, who are always on hand with a board and a stick in the show ring.

Geoff says: “The pigs are my domain, but Robert helps me out because he lives on the main farm, I do not, and he is able to feed them if I am not around.”

Robert says: “We wash the pigs several times before the shows and while you are washing them you are handling them. They soon come to love being washed and pampered.”

Geoff says: “Showing is a social thing for us and it is a shop window for our stock, we often sell animals from the shows. We are also trying to educate the public. It is the only chance many of them have to see a live pig so when we have done our showing we bring the public in and offer them the chance to come close to the pigs.

Loin chops are valuable, they could be the difference between making a profit and not.

We wash the pigs several times before the shows and while you are washing them you are handling them. They soon come to love being washed and pampered

The Welsh are also good mothers, quiet and easy to handle, therefore, no stress for the animal or the owner

“It is really important that people know where their food comes from, all children see is meat in a package on a supermarket shelf, and they have no idea how it has been bred or kept.”

The family enter about six national shows each year and have made some outstanding achievements including reserve champion of champions for the Welsh Breed at the Great Yorkshire Show in 2018. They have taken the breed champion title at Royal Cheshire Show for the last three years, in 2018 they took the championship honours at the Royal Three Counties Show and last year won the pairs championship at Royal Berkshire Show.

The whole herd now comprises about 400 head of pigs of varying ages including 10 boars and all the sows are bred using natural service. They usually produce between 12 and 14 piglets per litter and the aim is to raise 10.5 live pigs.

Geoff says: “We try and get over two litters from each sow per year if we can and providing the sow is producing as she should be they can be with us for eight-10 years or more. As they get older you can struggle to get them back in-pig.

“We are using different boar lines for each sow to achieve different characteristics in the progeny, We have lengthened the loin and now we are gaining three to four more loin chops than we were when we first started. Loin chops are valuable, they could be the difference between making a profit and not.” 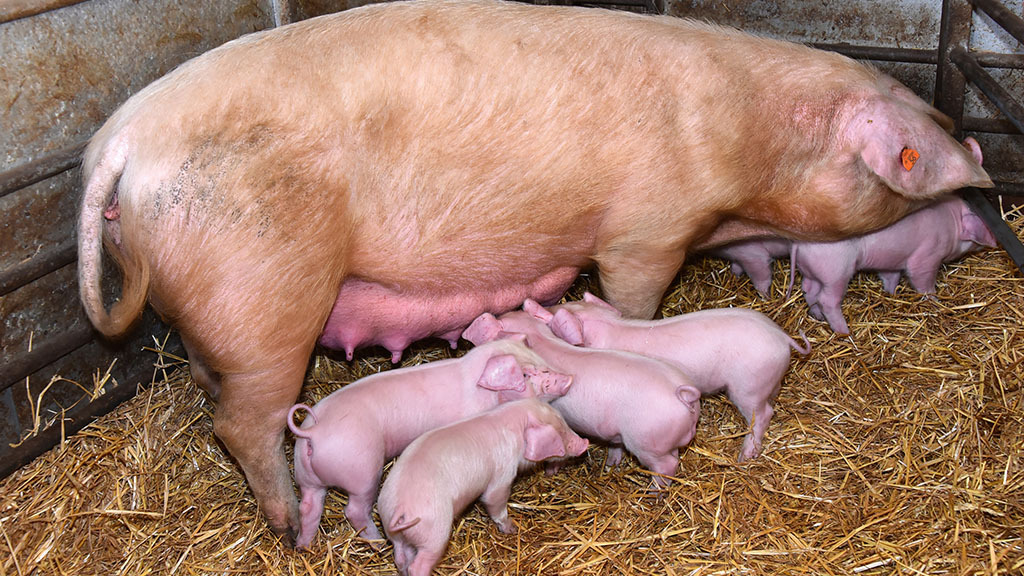 All the pigs regardless of age are fed a single ration, Mr Bemand says it is his ethos to keep things simple. They are fed the 16 per cent protein sow and weaner nut on the floor and weigh 75kg live weight at 18 weeks old. Geoff says: “We feed on the floor because we bed the pigs on deep straw. We have our own corn on the farm but we costed it out and if we milled our own crops we would have to feed in troughs and the first thing a pig does is tip the tough up unless it is fixed.

“We were not gaining a lot of money growing and feeding our own feed as we needed extra storage for the ingredients in the blend. The manufacturer we have are very good, and the ration is always consistent. We know it is going to be what it says on the analysis.”

Geoff says they are lucky to have an ample supply of straw on the farm and although the arable enterprise is run as a separate business by his other son, Tom, they work on a muck for straw agreement.

The design of the pig buildings means everything is flexible and can be altered and Robert has fabricated the majority of the metalwork in the sheds as well as some of the sheds themselves. He says: “We have made it so that one person can handle any pig from any pen alone. It is easier with two but we have made it so one person can manage.” The main outlet for the herd is for breeding stock, however, Geoff sells meat to local family butchers in Ludlow and Tenbury Wells and pork cuts through private customers. He also has some custom with a number of local hotels and restaurants.

Five to six pigs are sent to slaughter each week at A.H. Griffiths, Leintwardine. Limiting the amount of stress for the pigs is important to Geoff and as the abattoir is only 40 minutes from the farm he says they are killed promptly and efficiently. Any surplus stock is sold through Market Drayton market a couple of times a month. He says: “The market is an unpredictable place to sell pigs, it is up today and down tomorrow, but the Welsh pig demands a price consistently.”

This article was previously published in the Farmers Guardian. The publication offers a range of subscription packages at https://www.fginsight.com/subscriptions